At the Ship Delivery department of TOS, our Superintendents Myron, Thies, and Niels have sailed for quite some time. Niels: ‘We have all sailed in different positions and disciplines. But we have one thing in common: exploring the world while working in an adventurous and constantly developing industry. Nowadays we’re working at the office, guiding ship delivery projects for our clients, and delivering all kinds of vessels. We’re still active in the industry even if it’s not really on board. We always try to join our ship delivery crews when they have to perform sea trials or bollard pull tests. Supporting our crew at the Shoalbuster 2711 was quite an opportunity!’

‘After a period of interesting and difficult projects at the Ship Delivery department, we suddenly had some time left over since some of the projects were postponed. DAMEN Shipyards Group, a loyal client since the very beginning of TOS, had to transport a new build Shoalbuster 2711 towards Southampton. The vessel would be presented at the Seawork Marine and Workboat Exhibition. For Thies and myself, this was a very good opportunity to sail once again on a nice and powerful vessel. I was the first who could join the crew. The trip was relatively short: 370 nautical miles. We had to pass several bridges and, with a tight schedule, this was quite a challenge! Although we had prepared for most things, there’s always one thing you can’t plan for: THE WEATHER.’

‘On the 8th of June, 05:30 LT in the Netherlands, a very low depression settled in over the Southern part of Holland. With the wind up to Beaufort 8 at the coastline, strong winds were felt inland as well. The weather was no match for our enthusiasm and commitment; however, some bridge operators were less enthusiastic. Upon arrival at the first bridge our master, Tjalling van der Zee, called the operator and was informed that due to the heavy winds it wasn’t possible to safely open the bridge. We decided to stop at the waiting berth next to the bridge. After a couple of hours, we were called by the bridge operator and allowed to pass. Luckily, the next three bridges opened as well. Once we had passed all bridges, we were close to Maassluis, a town next to the river New Waterway; that is not far from the breakwaters of the Port of Rotterdam. This town has a rich history with port towage and is now recognised as cultural heritage. So, once a year they organise a so-called ‘Vlootschouw’, which is more or less a parade of old tugs and escort vessels. Once we were close to the port, we were asked to join the parade to present the newly built shoalbuster to the crowds and the people from the industry. Which, of course, we did :).’ 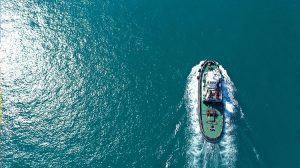 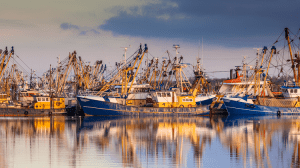 ‘As the weather became worse and worse, we decided to leave the port of Maassluis the next day. In the early morning of the 9th of June, we departed from Maassluis and went to sea. Once at sea, we noticed that the weather had improved. The sea was relatively calm, considering that only two days before a storm had been passing the English channel and Belgian/Dutch coastline. At around 06:00 GMT we arrived at Southampton, United Kingdom. We cleaned the vessel and prepared her to be in good condition for the exhibition,’ says Niels Barnhoorn Superintendent at TOS.

AND HEADING BACK AGAIN

Thies Kegge, Superintendent at TOS joined the vessel for the return trip. ‘After a rainy Seaworks exhibition and a lot of enthusiastic comments, it was time to sail back to Holland. When all the visitors had left we started preparing the boat to leave Southampton. On Thursday evening around 19:30, we cast off the quay in Southampton. That evening, after passing the Isle of Wight, the swell became quite heavy. It was nice to be at sea again.
The next day, the sky was blue and the sea was calm. A perfect day at sea. We entered the ‘Maasmond’ during a beautiful sunset. Around midnight, we arrived in the city of Dordrecht. We had to wait until the early morning for a bridge opening at the railway bridge of Dordrecht. After passing two more bridges, Captain Tjalling safely brought home DAMEN’s shoalbuster to the DAMEN Shipyard Hardinxveld-Giessendam.

TECHNICAL DETAILS OF THE VESSEL

Damen has developed the new 27-metre-long, 11-metre-wide vessel in response to recent Maritime Labour Convention (MLC) changes concerning crew accommodation capacity. Take a look at the press release of Damen about the shoalbuster and her visit to the Seawork Marine and Workboat Exhibition in Southampton.

YOUR DESTINATION IS OUR CHALLENGE

We are experienced in the relocation of all types of vessels. For an all-in price and with clear terms and conditions, we can take care of flag state registration, certification, ISM and instruction of the new crew in preparation of handing over the vessel.