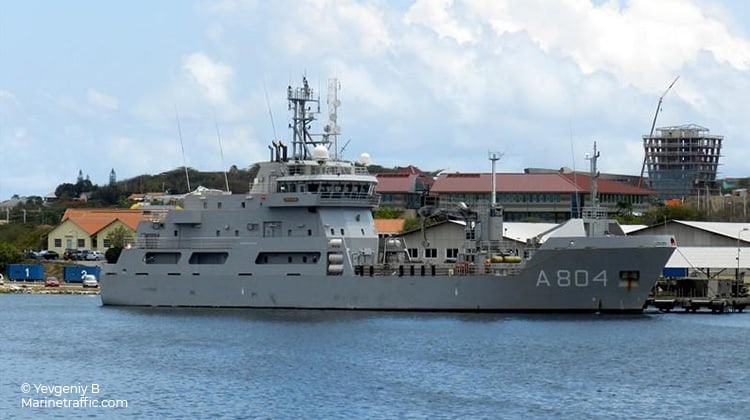 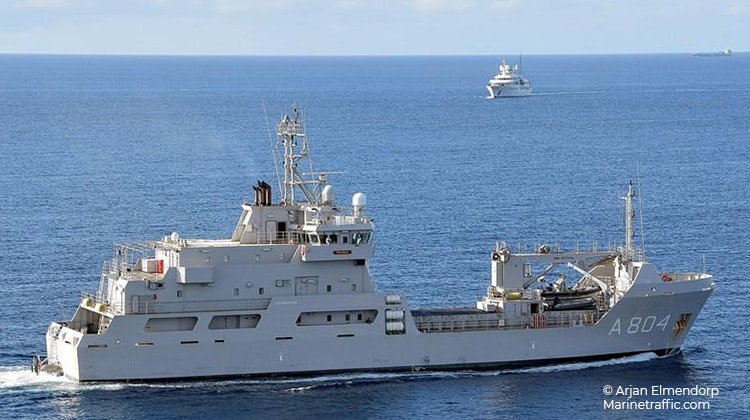 The Pelikaan, the first Dutch naval vessel to have been fully built abroad (Romania), travelled to the Netherlands under its own power in 13 days. By the way, I personally believe that a Dutch naval ship should be built in our own country.

This is a type DAMEN LSV 6513 which means that it was built at the DAMEN Galatz facility in Romania for the purpose of transporting troops and equipment between the islands of the Dutch Antilles.

A heavy deck crane serves the 2 holds and can load and unload the 20’ containers and boats. There is also a crane on the starboard fore side that can lower the fast RIB overboard. In addition, there is a small supplies crane on the port aft side. The entire ship is fitted with a water mist fire extinguishing system. Bearing in mind that this is, after all, a naval ship, it will also be equipped with weaponry.

At the beginning of May, I was phoned to ask if I would like to sail on the PELIKAAN as Chief Engineer from Galatz to Gorinchem. The last details would be finished in Gorinchem. After spending the last years mainly sailing new tugs from the shipyard to clients worldwide, this was a new experience for me.

The transfer crew of 8 came from DAMEN and TOS Rotterdam. With the addition of a bus-load of marines: the future crew (the old Pelikaan has been out of action in the Antilles since the end of 2005), the construction supervisory committee and a number of fitters. All in all, the ship was full and this meant that the galley was immediately put to the test, and indeed proved to be a success.

On 19 May, at 10.00 hours, we were ready to leave GALATZ. We sailed to the Bosphorus where we held an underwater diving inspection because the water of the Danube is too muddy to be able to film underwater. After lying at anchor for another 8 hours on the Bosphorus river, we were able to pass through. At a speed of 14 knots, we sailed in the direction of MALAGA, where we arrived on 26 May at 09.00 and left again at 16.00 hours. This time our speed was around 11 knots, which gave a 50% saving on fuel.

Our ETA was planned for the morning of 1 June at the Hook of Holland, where we would be holding further steering tests for classification purposes. After some rather breezy days in the Gulf of Biscay, we arrived as planned.
At 12.00 hours we sailed up the river and berthed in the shipyard’s small dock in Gorinchem.

As befits the arrival of a naval vessel, the wives and girlfriends stood waiting on the quay. Including ours. A special voyage was once again successfully completed.