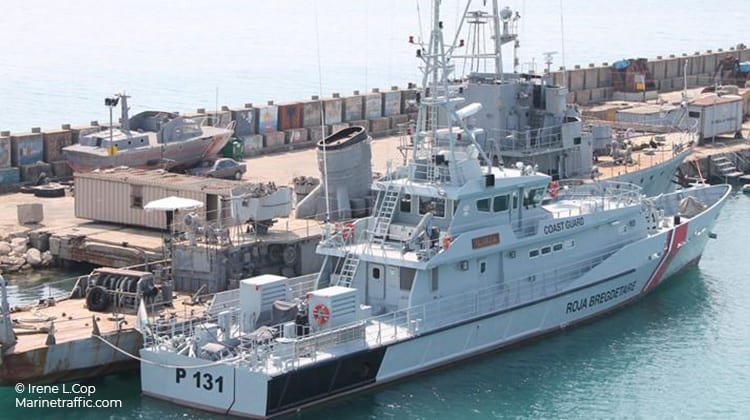 Another trip for Damen Shipyards Gorinchem. This time we were sailing with a Stan Patrol 4207. This was something different to the usual tugboats, and therefore a nice change.On Monday the 11th of August I boarded the ship in Gorinchem, where I was introduced to the transfer crew and the future Albanian crew who would be sailing with us in order to gain the necessary experience of the ship.

We then started getting the ship ready to sail, carrying the stores on board and building up the Satcom-C. As this was not a tug, we did not need to worry about the tyres. (The tyres: tugboats have tyres hung all round which are the size of those of a lorry or an aeroplane. These tyres are removed prior to the transfer journey, lashed on the afterdeck, and hung back up at the destination. This is a job which will keep you quiet for a while.)

Departure was planned for the 13th of August but with a weather forecast of gale force 7 to 8 on the Beaufort Scale we decided to stay another night in Gorinchem.
On the 14th of August we were ready for departure: everything was ready for sea and the weather forecast for the first few days was good. So off we went. Via Dordrecht and the Oude Maas to the sea. Outside the piers the sea turned out to be reasonably calm, and in good spirits we carried on to Dover.The following morning the weather was beautiful and we could see both the famous White Cliffs of Dover and the French coast. Up until then no-one had been seasick, so everything seemed fine. Only the Met Office again threw a spanner in the works with a forecast of stormy weather in the Bay of Biscay. But that was something to worry about later and for the time being we enjoyed the beautiful weather.

Seasickness nevertheless
Since yesterday evening the ship has been tossed from side to side and if you had walked through the ship you would not have thought that there were eleven people on board. Seasickness had struck. There was therefore very little interest in breakfast! It was as bad today as it was beautiful yesterday, with a strong SSW 6 Bft at an angle to the bow. The ship managed to stay upright and the gale warning was withdrawn.

When in the evening we sailed into the Bay of Biscay, it was already much calmer, but unfortunately for those amongst us who were seasick nowhere near calm enough.The Sunday started well and we enjoyed the beautiful weather (except for the last of those who were seasick), the many whales (minke whales) and a big lunch with a good glass of wine. In the evening the wind unfortunately increased to SW 7/8 Bft again and we prepared ourselves for a turbulent night. And indeed it was rough and we were glad when on Monday morning the wind subsided and turned towards the NW.
When we finally passed Cape Finisterre and left the Bay of Biscay behind us, the weather improved considerably and we sailed to the sunny South in good spirits. In the morning we saw three fin whales at less than 50 metres from the ship. Always a fantastic experience. Certainly seeing fin whales which unfortunately are now rare. Fin whales are however quite camera shy, so again only photos of submerged whales.

On Monday and Tuesday it was good sailing. We surfed on the high north-westerly swell and made good time. With a full moon it is also beautiful at night. Everyone had by then recovered from their seasickness. We took advantage of the good weather and cleaned up.

A week under way
The first part of the journey was already nearly over. We were approaching the Straits of Gibraltar and in the evening we called at Malaga in order to bunker. For the transfer crew 6 days at sea is only a short journey. Our Albanian guests were clearly not used to this. They thought it was taking much too long and in particular they were frustrated by the lack of telephone signal. By the time we had a signal, their telephone batteries were probably empty due to all the searching for networks.
In the afternoon we sailed through the Straits of Gibraltar and in the evening we moored in Malaga.

After a pleasant evening in Malaga and hence a short night’s sleep, we departed the following morning for the last 1300 miles to Durres. Upon departure we let the future captain manoeuvre the ship and in this way we gradually handed over the ship to the new crew. Outside the weather was calm and with a speed of 10.8 knots we made good progress. Friday the 22nd of August was a calm day, good weather with a calm sea. Apart from the day-to-day tasks, little else happened. Still a good speed. All in all an easy day.
On Saturday the 23rd of August a wind got up from the Northeast and the ship was swaying a bit more again. As a result our speed was somewhat slower which frustrated our guests. The ladies in the galley put themselves out with a copious Captain’s dinner, a Groningen rice table with everything that goes with it, soup as a starter and ice-cream for afters.
Monday the 25th of August was the last full day at sea, so we started cleaning in order to arrive clean at the quay the following morning. In the morning the sea was still bumpy but luckily it quickly got better and it turned into another beautiful day.

The reception committee
The day of arrival, so everyone  was busy: swabbing floors and once again rinsing off around the outside with fresh water, still got some seawater over it during the night.Our Albanian colleagues were in ceremonial uniform. Upon arrival we were royally saluted and greeted with flags.

Following arrival the Chief Commander of Naval Operations was welcomed on board and the transfer papers were signed. In the evening the Chief Commander took us out to dinner: very enjoyable and we drank a toast to everything, luckily with good wine.

On our last day our Albanian friends showed us around and we visited a castle and a museum, and in this way we learned something about Albanian history.All in all a nice conclusion to this trip. Tomorrow we are flying home with another wonderful experience behind us.