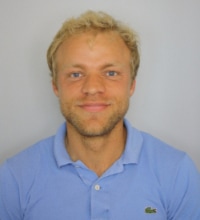 ‘In 2003, I earned my Bachelor’s degree for Maritime Officer. My first job was as Assistant Engineer on the Holland America Line. Next, I worked as an Engineer in the dredging industry – a job that I enjoyed immensely. After several years I had had enough of “life at sea” and I wanted to make the transition to shore. Many technical specialists are wanted at maritime and offshore companies, but elsewhere as well. I found myself wondering, ‘How do you determine what companies and for what vacancies you want to make the shift to onshore?‘

‘On the TOS website I was triggered by a number of interesting vacancies. When Eline contacted me for a meeting in person, I grabbed the chance with both hands.

Eline asked me various questions to get a clear idea of my motivations and wishes. In addition, she explained what the differences were between working at sea and working onshore. What became clear to me was that the communication and mutual interaction in the two different worlds cannot be compared. The company culture also plays an important role in the choice that I wanted to make for a certain organisation or position. Eline prepared me for the fact that, during job interviews, among other things the questions would focus on my strong and weak points and how I prefer to interact with co-workers and managers.’

TOS Senior Consultant Eline Suurmond: ‘It is just great to offer seafarers a new career that suits them well. Both Pim and Damen are content about the match made.’