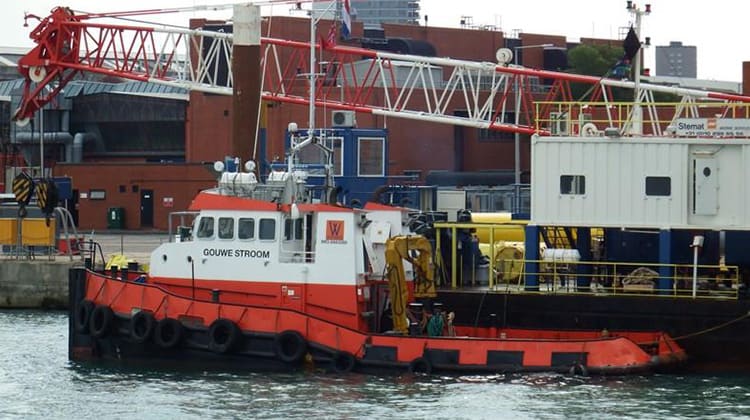 After a leave of seven days on our way again to the next job for TOS. This time taking the Thalys via Paris to La Rochelle to do anchor handling with the Gouwestroom and to sail personnel for Scaldis. All these in order to salvage wrecks near the island Ile de Re on the French coast. Unfortunately, the weather is not very co-operative in October and during the first five days we mainly carry out maintenance work on ship and crane pontoon in the port of La Pallice. In the evening of day 5, we shift the pontoon to the south side, as wind force nine has been forecast. So tomorrow we shall stay in as well.

The next morning there is indeed a stiff breeze with a strong long heave into the port. At 07:00 AM we lie moored along the pontoon expecting to do most maintenance activities during the day. Around half-past eight the pilot boat goes out and shortly after that the two harbour towboats. At nine o·clock a freighter appears at the harbour entrance and we observe that things do not go as planned. The towing cables of both harbour towboats have broken, the ship is adrift and slowly runs towards the splitting dam. The tugboats fasten up again, but now the freighter lies right across the wind and is drifting considerably. Cable after cable is drawn to pieces and the freighter goes out across, drifting towards the fixed bridge of La Rochelle to La Pallice.

We decide to unmoor and to offer the pilot our assistance. Twice there is no reaction to this. However, we stay in the neighbourhood. In an act of despair, the freighter drops anchor but has too much speech, so that the anchor doesn’t grip. The bridge is rapidly coming nearer now and the pilot requests us to push the bow on the port side, in order to get the head into the wind this way. However, it is too late and too little. Together with the harbour tugboat Brehat, we push all we can, but it is no use.

It is becoming too dangerous and we must get away from there and prevent ending up between the bridge and the freighter ourselves. Finally, the ship bumps against the bridge with a firm bang and so destroys both an oil press line on the bridge and its own bunker tank. The harbour towboats refuse to ask for our help and try to solve this themselves. The result is five destroyed towing cables.

At that moment we are together officially requested by the ship and the action can make a good start. The harbour tugboats attach at the rear and we tug the bow. However, even with the help of the screw of the ship itself little happens. Our stretcher breaks, so we hurry to put a new stretcher on the wire with the water coming across and after 15 minutes a hitch is fastened again on the tank of the freighter.

Meanwhile, another pilot has started to assist his colleague and with combined efforts, we managed to pull the ship free and moor it. The next day we appear in the newspaper as the Remorquer Hollandaise “Gouwestroom”. The bridge is closed for all traffic and shifted on its foundations. The tankers cannot be unloaded, the trains with ammonium nitrate and containers cannot cross the bridge, the harbour tugboats have considerable damage, the freighter can stay for two weeks to make bank guarantee arrangements, the pilot is on Prozac, and we….. we are splicing a new eye in the stretcher and start working on the maintenance, for we didn’t get to that yesterday.